CSB Again Calls for Increased Safeguards at Oil and Gas Sites.  The U.S. Chemical Safety Board (CSB) recently distributed educational materials concerning oil site hazards that threaten the lives of teenagers to more than 150 ississippi school superintendents. CSB is calling on schools across the state to incorporate the video and lessons into school curricula.

The project’s aim is to save the lives of teenagers in rural areas who often socialize at oil and gas production and storage sites and who are seemingly unaware of the explosion hazards. The products include the CSB’s safety video, "No Place to Hang Out: The Danger of Oil Sites," and a lesson plan to be incorporated into school curricula across the state.

The “No Place to Hang Out” video was released in April and tells the story of the tragic deaths of 18-year-old Wade White and 16-year-old Devon Byrd. The two boys were killed Oct. 31, 2009, when an oil tank located in a clearing in the woods near one of the boys’ homes in Carnes, Miss., exploded.


Chemical board calls for safer oil, natural gas storage tanks after explosions ...Washington Post  Explosions from oil and natural gas tanks tucked away in isolated areas killed 44 people in the last three decades, federal regulators said Thursday as they called on companies and officials to make the storage sites safer. Thousands of tanks are in ...

Chemical Safety Board: Oil and Gas Exploration and Production Sites Are ...EHS Today  On Oct. 31, 2009, two teenagers, aged 16 and 18, were killed when a storage tank containing natural gas condensate exploded at a rural gas production site in Carnes, Miss. Six months later a group of youths were exploring a similar tank site in ...

The Cenotaph
For Immediate Release

Do you know someone whose sense of responsibility, inspirational leadership, and exemplary persistence and courage protects children from hazards and unhealthy school or community conditions?


By nominating a Hero you can help make March 18 an annual day that brings the Lessons of the 1937 Texas School Explosion to our nation's schools and celebrates the leadership that can save lives. See: "Set aside a special day each year as a memorial..."

The Healthy Kids Healthy Schools Hero Award was created as an annual opportunity to tell the story of New London Texas' preventable tragedy, to promote inspirational examples of leadership and partnerships, and to start conversations to identify and eliminate chemical hazards and unhealthy conditions that put children at risk today.

The Heroes Award is part of an ongoing campaign to bring "safety" from the margins to the core of school curriculum and community culture.

The goal is to strengthen parent involvement and community partnerships to establish the 21st century standards and safeguards that can protect children from deadly explosions, fires, chemical spills and toxic exposures.

This cenotaph, erected in 1939 is the memorial to victims of the explosion. The sculptural block of Texas granite depicts twelve life-size figures, representing children coming to school, bringing gifts and handing in homework to two teachers. Around the inside of the base are the individual names of those who died.  The Egyptians defined a cenotaph as a symbolic tomb, honoring the dead but not containing the body. It is a sepulchral monument erected to commemorate a person or persons buried elsewhere. 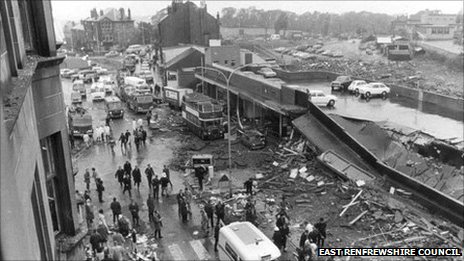 Events are being held this weekend to mark the 40th anniversary of the Clarkston gas explosion which killed 22 people and left more than 100 injured.

The blast flattened a row of shops in the town and impacted on a passing bus just before 15:00 on 21 October 1971.

It was described as the worst peace-time explosion in Scotland. An inquiry later found no-one was to blame.

A flower laying ceremony will take place next to Clarkston Hall at 15:00 on Friday.

This will be followed by a special service at Greenbank Church at 14:00 on Sunday.

East Renfrewshire Provost Alex Mackie said: "The Clarkston explosion took many lives from our community but it touched many more.

"The families and children who were left behind in their grief, the many people injured and the many more people who knew someone affected by it.

"We are joining with the local churches and community to remember the events of 40 years ago.


..."The report lays out a challenge to the academic community, " says Neal Langerman of Advanced Chemical Safety Inc. in San Diego. "We really need a 'safety culture' in university labs."


... Lab accidents at schools and colleges happen 10 to 50 times more frequently than in the chemical industry, according to Jim Kaufman of the Laboratory Safety Institute.

Evacuation by bus to another site may not be practical if it's a large gas fire, like San Bruno or Edison NJ. The thermal flux (radiant heat) could be enough to panic children, even if there's been evacuation drills before. It sounds like very poor siting of the schools or pipelines was done here.....

...... Jacobs said she felt the school board had dropped the ball on the subject, and was glad she could make a valid point which its members understood.

"They just want to ignore the thing over there, and everybody's going to hold their breath for the next 50 years and hope there's not a problem," she said.


Over the past few months, EPA has found a number of cases of asbestos contamination in schools in Region 10. In one instance, school personnel removed ceiling tiles as part of a school project and inadvertently disturbed asbestos-containing dust. In another case, contractors hired by the school district removed asbestos floor tile without first identifying it as asbestos-containing material. EPA has also learned of volunteers who are being asked to sand and paint portions of their schools without proper safety precautions and training.

Schools need to carefully consider repair and maintenance projects for school buildings to avoid potentially harmful exposures. Some approaches schools should use include:

1. Know The Age of Your Buildings– Both lead and asbestos were used extensively in building products sold prior to 1978.

2. Get Professional Help if Pre-1978 – If you allow any untrained person to disturb pre-1978 building materials, there is a good chance you are exposing that person to both asbestos and lead and are doing something illegal.

3. Don’t Make Assumptions about Building Materials – There is no way for you to determine whether there is lead or asbestos in a building product by visual inspection. Specialized equipment and trained personnel are required.

EPA is recognizing that school environments are very important for children, and is calling attention to the tools and resources available for communities to improve school environments, address indoor air quality, and reduce exposures to chemicals and pesticides, ultimately making their schools healthier and safer places for children.

All of EPA’s tools and resources can be accessed through EPA’s Schools Web Portal, http://epa.gov/schools/.

-- Highly recommend: EPA newsletters that offer tips and information to keep schools in the Pacific Northwest and Alaska environmentally healthy and pollution-free.

To promote a national framework for the prevention of chemical incidents in schools, the ATSDR National Toxic Substance Incidents Program (NTSIP) has teamed up with Interstate Chemical Threats Workgroup (ICTW) to bring you this exciting fall webinar series.

At the conclusion of the webinar series, the summary notes will guide the development of a white paper entitled, Best Practices and Policies for Eliminating Chemical Releases and Exposures in Schools.

This paper will be distributed nationally and will serve as a basis of ATSDR’s outreach to those who can effect change. If you are not an ICTW member, but would like to attend please contact Lori Copan at lori.copan@cdph.ca.gov.

The Pipeline Safety Trust frequently hears from landowners who live near pipelines with questions about pipeline safety, the government processes for routing pipelines, easements and eminent domain, right of way maintenance and use limitations, property values and insurance, and many other topics related to living near a pipeline.  Last year we received a grant from the U.S. Department of Transportation, Pipeline and Hazardous Materials Administration to produce a guide for landowners to provide answers to many of these questions.

We are happy to announce the release of the Landowner's Guide to Pipelines, developed following input from landowners and those about to become pipeline neighbors who advised us what kinds of information landowners living with pipelines need to have. If you would like a printed copy (or more), please let us know. (Please phone or send an email with your mailing address to riley@pstrust.org - don't post it on the list). We'll be happy to mail them to you. For those of you who just can't wait for a copy in the mail, the Guide is also available as a pdf on our website at http://www.pstrust.org/library/docs/landownersguide.pdf

Thanks for your continued support.


Develop a "Safety Bill of Rights" for your school.  For example: