(Also see: You can prevent explosions in your school. ) 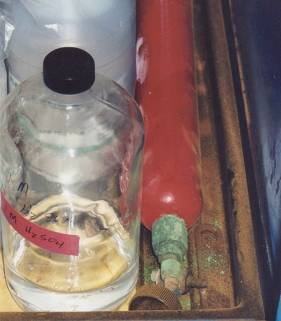 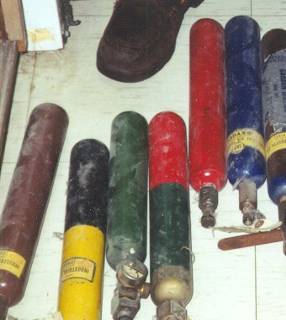 The lecture bottle (small gas cylinder) in the left photo was found in a high school corrosive storage cabinet.  The cylinder was unlabeled and none of the current teachers knew what it contained.  The corrosive vapors from a leaking bottle of sulfuric acid had seriously damaged the valve.  The teacher said she had considered cracking the valve and bleeding out a little gas to see if she could determine what it was by the smell but had thought better of it.  Fortunately, a former chemistry teacher was substitute teaching that day in a nearby room. When asked about the cylinder, he said, “Oh yeah, I know what that is.  It’s just chlorine.”

The lecture bottles on the right were from another school.  The red cylinder has the word “Chlorine” hand written on it in grease pencil.  None of the teachers knew these cylinders were stored in a box in a hidden shelf in the chemistry storage room.  In both cases, no one had the faintest idea of how to dispose of them, nor were they aware of the need to get them off their property as soon as possible.

In both cases, once I explained that there was sufficient pure chlorine gas in a full lecture bottle to be immediately life threatening to 100,000 people if distributed evenly, the schools were immediately in agreement that those gas cylinders needed to be removed and properly disposed as fast as possible.

What lessons can we pull from these two stories of unneeded toxic gases?
Vignette #2: Toxic & Oxidizing Lead Nitrate – Risk Factor 3 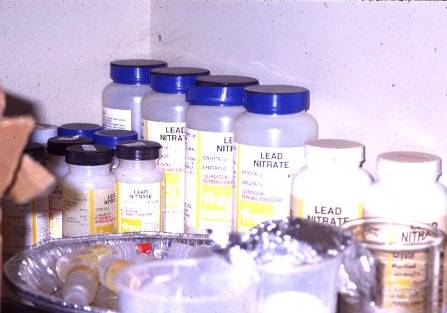 A middle school in Washington State had over 500 containers of lab chemicals, including 13 pounds of lead nitrate, in their science stockroom.  Lead nitrate is a poisonous oxidizer that is often used in dilute solutions and reacted with other chemicals to create colorful precipitates.

I asked the teacher if he used the lead nitrate.

“Well, let’s see, I use one gram each quarter in the double displacement lab, and another gram a year in the flame test.”

He laughed and agreed that he could probably get rid of some.  By the end of the discussion, he kept the newest container and set aside the other 12 pounds for disposal as hazardous waste.

And, most importantly, he was then willing to dispose of another 150 pounds of hazardous chemicals that were on his shelves without feeling threatened that I was there to get rid of his needed chemicals.

What lessons can we pull from this typical story of too many bottles in storage?
Vignette #3: Corrosive Hydrofluoric Acid – Risk Factor 4 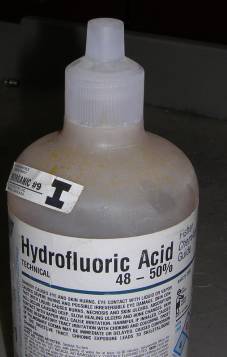 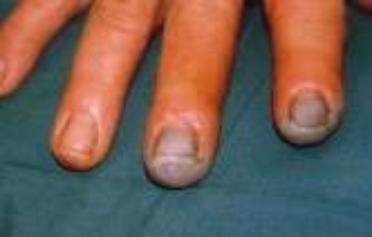 While dissolving minerals in a geology process laboratory, a technician spilled less than half a pint of  hydrofluoric acid (HF) onto his lap, splashing both thighs. The only protective equipment worn were chemical-resistant gloves.
He received chemical burns to nine percent of his body despite washing his legs with water from a hose at 1.5 gallons per minute. His contaminated clothing was not removed during the flushing process. Following flushing, the technician immersed himself in a chlorinated swimming pool for 40 minutes before an ambulance arrived. He became unconscious soon after arriving at a nearby hospital and his condition continued to deteriorate despite their best efforts.  His right leg was amputated seven days after the exposure and he died eight days later.

Investigators said he should have been wearing full length PVC coveralls with sleeves to the wrist, a face shield, rubber boots, safety goggles and mid-arm length PVC gloves while working with HF in a fume hood.  Calcium gluconate gel should have been nearby for immediate application on any exposed skin surface before the acid could penetrate the skin.

From this report  you can see why hydrofluoric acid (HF) is considered dangerous; it’s very toxic and readily passes into the bloodstream through exposed skin, a potent combination of risk factors. The fluorine ion in HF preferentially binds with calcium. Spilled HF acts as an anesthetic as it passes through the skin into the bloodstream where it quickly begins to dissolve bones and cause systemic poisoning. This is why HF is considered the highest risk acid in schools. Other acids may be corrosive but they do not contain this additional secondary effect that increases their risk.

As you may have guessed, no secondary school in the United States has safety gear or spill supplies available that resemble the recommended personal protective equipment described in the anecdote.

Both art classes and science classes can include classroom activities that use HF.  Though most science teachers are willing to eliminate their collection of old HF containers, that’s often  not the case with art teachers.  Why would an art teacher argue to keep their HF paste?  Because it has been used by artists for years in stained glass and other glass-etching techniques.

HF dissolves glass on contact, releasing harmful fumes, as described by Arthur Duthie in 1908 in Decorative Glass Processes. "The fumes escape from full strength acid so profusely as to be quite visible like a yellow smoke, and are not only obnoxious, but dangerous. Even at moderate working strength they will cause bleeding of the throat and nostrils in persons in whom these organs happen to be weak, while they commonly cause severe smarting of the eyes..." 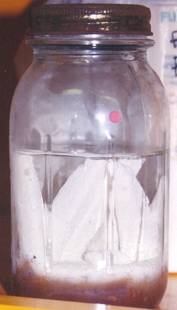 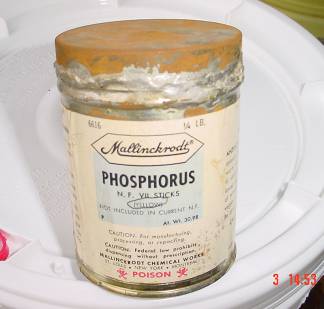 White phosphorus is pyrophoric, as is yellow phosphorus, which means they spontaneously ignite in contact with air.  Pure phosphorus is highly toxic and should be stored under water.

The Canning Jar on the left has a large amount of white phosphorus which, over time, has reacted make the water acidic and corroded the container’s lid.  This has allowed water evaporate over time and lower the water level to a quarter-inch above the top of the phosphorus sticks.  If the water layer lowered even slightly, the risk of spontaneous combustion are very high.

The teacher said he needed to keep it, because he used it in a lab.  Turned out that all he did was cut off  a piece, take it outside and drop it on the pavement where it released poisonous smoke and burned a hole in the asphalt.  Unlike him, I was unconvinced that this was “good science.”

Why would a middle school science teacher have this much white phosphorus, and why would he try to convince me that he needed to keep it?

Upon reflection, I think there were three reasons: 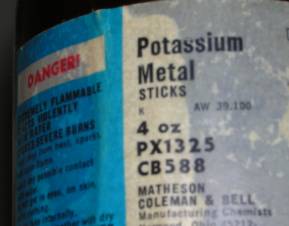 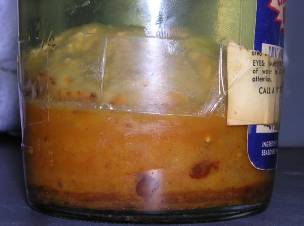 Potassium metal is highly water-reactive.  Though not commonly found in schools, science teachers use it to demonstrate the properties of the alkali metals.  First a piece of lithium is dropped in water and fizzes.  Then a piece of sodium metal is dropped on the water, where it turns into a molten ball that dances across the surface, fizzing loudly.  When potassium is dropped added, it zings around the surface of the water with purple flames shooting into the air above it.

Potassium is sold as silver-gray sticks of soft metal under kerosene or mineral oil to keep moisture away.  It reacts with the air; first to form white potassium hydroxide crystals.  After time has passed, the reaction continues and forms potentially explosive peroxide crystals.  Peroxidized potassium, seen above in the photo on the right, is characterized by orange, red or purple crystals.

Peroxidized potassium was found in the same middle school stockroom as the white phosphorus shown earlier.  The teacher was unconvinced when I said the container must be disposed, saying “I can use it, I’ll just scrape off the orange stuff.”  I pointed out that the act of scraping could start a chain reaction that would cause the entire chunk to detonate.  He still persisted in saying he needed it.  Finally I said “Look, if you do that, it could blow your hands off.”  As if snapping out of a hypnotic state, he looked up and went “Oh!, Well then. Maybe I can just use the newer jar over here instead.”  After three days of treatment and $6,000 in fees, the stabilized material was disposed as hazardous waste.
Posted by Ellie at 4:19 PM