Send your hero's story, name, and email/phone # by January 15, 2015 to ellie.goldberg@healthy-kids.info

The annual Healthy Kids Hero Award was created as an annual opportunity to tell the story of the 1937 Texas School Explosion and to inspire leadership to protect children from the chemical hazards and unhealthy conditions in today's schools.  (HEROES 2004 - 2014)

March 18, 2015 is the 78th anniversary of the 1937 Texas School Explosion -- the worst school disaster in American history. Just minutes before the end of the school day, a gas explosion killed more than 300 people, mostly students. In their new state-of-the-art public school no expense had been spared except when it came to safety. 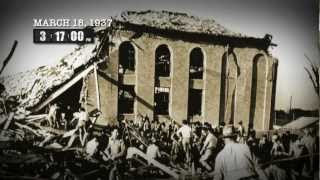 New London Museum Video 4:23  New London, Texas, was known
as the richest independent school district in the United States...
Experience the tragedy and triumph as you step back in time with
a visit to the London Museum in New London, Texas.
Lessons Learned. Lives Saved. The disaster resulted in a law that required adding a warning odor to natural gas, thus saving millions of lives all over the world. However, the false economies and short-sighted decisions that led to the 1937 explosion are still common in too many schools today.

*Photo (Ellie Goldberg, March 2005) The cenotaph, erected in 1939 is the memorial to victims of the 1937 school explosion. The sculptural block of Texas granite depicts twelve life-size figures, representing children coming to school, bringing gifts and handing in homework to two teachers. Around the inside of the base are the individual names of those who died.  The Egyptians defined a cenotaph as a symbolic tomb, honoring the dead but not containing the body. It is a sepulchral monument erected to commemorate a person or persons buried elsewhere.