Every year, to mark the anniversary of the March 18, 1937 Texas School Explosion, I salute a hero for inspirational leadership and a commitment to the safety of children and their communities.

The Hero Award was created as an annual opportunity to remember the 1937 tragedy — a gas explosion that killed more than 300 people, mostly students, in their new state-of-the-art public school where no expense had been spared except when it came to safety.


One lesson the 1937 tragedy is that a safe quality environment depends on champions with an extraordinary sense of responsibility. We can't take it for granted that elected officials make community safety or health a priority.

Audrey Schulman is the 2017 Hero because of her strategic advocacy and creative leadership confronting the threat of Climate Change. She is raising awareness of methane leaks from old pipelines, engaging ever widening circles of allies and partners, and achieving  major advances in utility company cooperation and infrastructure best practices.

Creating a Culture of Responsibility

Schulman is a master at connecting the dots from data to public policy. Policy makers, advocates and utility companies who share her sense of urgency about reducing methane emissions rely on Schulman for accurate data, beautifully designed resources, and trusted relationships.

“Audrey took the results from our 2013 Boston gas study to the next level by meticulously mapping leaks from hard-to-access records in over 200 cities and towns in the Commonwealth. Along the way she has engaged and activated communities to create a groundswell of public support to save ratepayer money, our urban trees, air quality and our climate. Audrey is a hero for all these reasons but most of all for our children's health and their future.” — Boston University Professor Nathan Phillips.

Schulman has devoted countless hours to community outreach and education, personal meetings and public campaigns. Her partners and allies have produced online advocacy toolkits to enable citizens and government officials to protect health and save consumer and municipal dollars.
"Audrey demonstrates an unfortunately rare combination of good intentions, intelligence, and grit to make sure that change actually happens. The environment, or any cause she champions, has no better friend.” — Massachusetts State Representative Lori A. Ehrlich.

A Mom with a Mission

When Schulman became a mother in 2000 she suddenly could visualize the impacts of the climate crisis on her son’s lifeline. When the Boston Globe published her letter in support of a proposed wind farm, she knew that activism was an antidote to the paralyzing fear of the loss of a livable environment.

In an Orion magazine article she tells the story of breaking the incapacitating group cohesion of the bystander effect with a call to action!  (How to be a Climate Hero, https://orionmagazine.org/article/how-to-be-a-climate-hero/)

Schulman, a writer with a background in programming and toy, web and multimedia design, started connecting with friends and neighbors, community leaders and organizations, and local elected officials to work on projects to reduce greenhouse gas emissions.

Schulman became the Co-founder, Evaluator, Site Manager, and the President of the local non-profit HOME ENERGY EFFICIENCY TEAM (HEET). HEET teams work with residents, small businesses and non-profits in Somerville MA and Cambridge MA to make their buildings more energy efficient. Schulman assesses houses prior to energy-upgrade work-parties and manages the work. She personally weatherized her own home to lower its carbon emissions 50%.

HEET measures its impact in dollars, carbon reduction and community benefits. HEET has trained 3500 volunteers and 70% of the volunteers who then use four or more of the hands-on skills they learn to reduce energy use in their own homes. HEET’s partnership with the Cambridge Solar Challenge increased residential solar installations ten fold over the normal rate of solar installations in Cambridge. See MORE 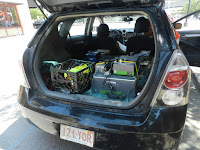 After working on conservation and energy efficiency for several years, Schulman saw a 2013 newspaper article that said the amount of gas leaking from pipelines cancelled out all the savings from the state’s energy efficiency program.

Schulman became a champion and leading spokesperson targeting leaky pipelines. She teamed up with Boston University Professor Nathan Phillips and Robert Ackley of Gas Safety Inc. to measure methane leaks on every street in Cambridge and Somerville with a high precision methane analyzer. They found more than 780 leaks.

HEET published the “Squeaky Leak Report” about the harm caused by the methane leaks and described how utility companies were charging ratepayers for the lost gas. The maps showed residents and legislators the leaks near their own homes, schools, and parks. It quickly became an important and urgent local issue.

“Audrey Schulman is a profoundly enabling organizer. She knows how to move an issue into the spotlight.” — Ed Woll, a Sierra Club volunteer who worked closely with Schulman as members of the Gas Leaks Alliance comprised of The Massachusetts Climate Action Network, Clean Water Action, Sierra Club, Boston Climate Action Network, Metropolitan Area Planning Council, Conservation Law Foundation, and other environmental groups and civic associations working to reduce emissions and to promote renewable energy throughout the state.

When a 2014 state law required utilities to report pipeline leaks to the public, the utilities Eversource and National Grid produced data in hundreds of pages of indecipherable tiny print. Schulman transformed the data into spreadsheets and maps for over 230 municipalities across Massachusetts. (HEET Gas Leaks Maps)

Senator Elizabeth Warren recognized HEET’s efforts. “Thanks to data collected by the Home Energy Efficiency Team, we know that in 2015 there were over 1,400 unrepaired natural gas leaks in Boston, over 400 in Weymouth, and over 500 in Springfield. Across the Commonwealth, a whopping 15,000 leaks still require repair, and many have been leaking for decades." (South Coast Today, 11/20/2016)

The Power of Partnerships 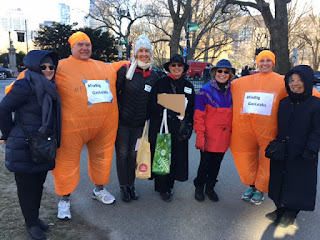 Audrey triggers activation energy in others

Mothers Out Front's army of moms soon joined the Gas Leak Alliance. "Audrey is just one of those rare people who is true of purpose. Her goal is clear — to stop climate change. She is well-informed and always kind. She has a gift of making allies. We start a meeting talking about our kids and easily find common grounds. She is rigorous and gracious at the same time. She knows her facts. She wins trust and respect. She thinks like a scientist and writer at the same time. Audrey triggers activation energy in others." — Zeyneb Magavi, Schulman's friend and HEET colleague, and Co-coordinator of Mothers Out Front.

MOF members made calls, wrote letters, and showed up in large numbers to testify at hearings and to lobby legislators, and for events such as gas leak safaris, “Raise a Stink” campaigns and gas leak tag teams and a 30th birthday party for Boston’s oldest leak at the intersection of Park Drive and Beacon Street. Mothers Out Front Action Manual

Mothers Out Front In Action
In 2015, Boston MOF members successfully proposed that Boston take the lead in passing a resolution to support state legislation designed to stop consumer charges for lost gas (as has been done in TX, PA and other states) and to incentivize the utilities to fix the leaks whenever significant road work is being done. Moms and their allies throughout the state worked to get 37 cities and towns to pass resolutions supporting the state legislative initiatives and got more than 50 legislative sponsors signed on as co-sponsors.

In December 2016 Mothers Out Front and its many allies celebrated with Boston city officials when Boston Mayor Walsh signed a strong Boston Gas Leak Ordinance. 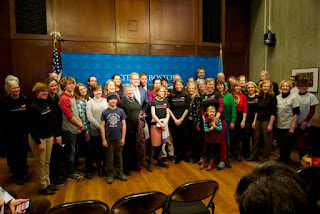 “This never would have happened without Audrey’s work and help.” — Kristine Jelstrup, Mothers Out Front.

Written by Sierra Club’s Ed Wool and Conservation Law Foundation’s Megan Herzog and sponsored by Boston City Councilor Matt O'Malley, the ordinance will speed up the repair and replacement of leaky gas pipelines by improving coordination of infrastructure repair with the utility companies.
In the Works: There must be a better way!

LOST LEAKS.  Schulman’s high standards, curiosity, analytical eye and dedicated circle of experts continuously raise fresh questions about the reliability of the data and the science of identifying and measuring the methane leaks before and after repairs.  Schulman and her colleagues discovered serious discrepancies in the utility companies' leak data from year to year. (LOST LEAKS.)

“This suggests that the utilities aren’t doing a good job tracking leaks. If they don’t have them on their books, they’re not monitoring them, and if they’re left unmonitored, leaks get worse.” — Audrey Schulman (Missing gas leaks raising questions Boston Globe, David Abel June 3, 2016.)

SUPER EMITTERS. Research published by Margaret Hendrick and BU Professor Nathan Phillips found that 7% of leaks surveyed contribute 50% of total methane emissions measured and that there was little difference between the dangers of the Grade 1 leaks that utilities are obliged to fix immediately, and Grade 3 leaks that they consider non-hazardous.

The good news is that the value of the recovered gas would be greater than the cost of closing the leaks. 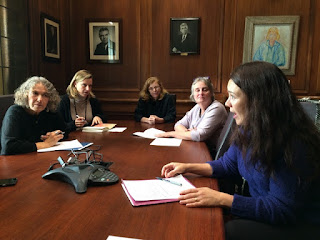 After meeting with Schulman and Mothers Out Front leaders, the utility companies agreed to a Super Emitter Pilot Study in Cambridge designed to find the most reliable method to identify the leaks that emit the most methane and to verify leak measurements before and after repairs. The utilities also agreed to ongoing collaboration, to sharing data, and to continuing the conversation about pipelines and renewable energy.

The lessons learned will have implications for the efficient and quality management of gas pipelines nationwide and for shaping legislation for regulating utilities. The results will save municipalities, utilities and ratepayers the huge cost of lost gas, avoid disruptive and duplicative road work, lower the health and life-threatening safety risks of neighborhood gas leaks, and reduce the threat of climate change. 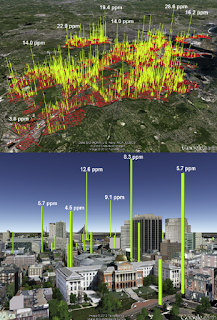