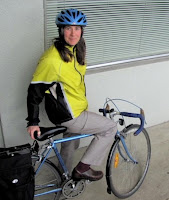 
“Tens of thousands of children are better protected because of Aimee’s work. She helped design and pass a law in Oregon that requires schools to use integrated pest management. She also works directly with school staff to eliminate chemical hazards.” Read the Nomination describing Aimee's work eliminating chemical uses In and around schools, creating a native plant garden, and supporting laws designed to protect children from pesticide exposures.

When Aimee Code was in college, she read Circle of Poison: Pesticides and People in a Hungry World by David Weir and Mark Schapiro. It gave her a deep desire to make a difference.

Later, when she was in the Peace Corps in Honduras to work on organic gardening projects, she saw people using pesticides on their corn and beans. They were proud of using ‘modern’ products  but the chemicals were killing their native herbs and medicinal plants. They were losing their cultural heritage and horticultural knowledge.

She saw chemicals in their kitchens and on their clothes and bodies. Children were drinking out of old pesticide containers. People offered each other drinks in chemical containers not the traditional clay gourds.

She came back to the US committed to reducing pesticide use. She earned a Masters of Science in Environmental Health and Toxicology and joined the Northwest Center for Alternatives to Pesticides (NCAP) in 2000 to work for effective pest management solutions and safer communities.

As part of a stakeholder group on children and pesticides, Aimee was instrumental in writing Oregons IPM law requiring schools to have policies to ensure non-chemical solutions and prevention techniques were attempted prior to chemical pest control. The law requires Oregon schools and community colleges to adopt IPM policies by 2012.

Now NCAP works to support schools on ground, giving them the help they need to make sure this new law is a success. 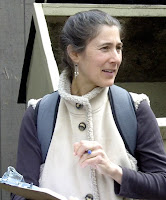 IPM Is always first and foremost about preventing pest problems, says Aimee. It means helping facility managers understand the source, solve the root problems and change conditions conducive to pests. Is the dumpster too close? Is there food in the classroom and clutter in the storeroom? Are there holes in the foundation?

Aimee’s experience has taught her that the issue of pesticides can raise hackles. She engages school staff by addressing immediate concerns and encouraging them to make simple changes. More than manuals and handouts, her personal passion, knowledge and communication skills build trust and win collaboration for solutions without pesticides.

She has also reached out to Oregon Green Schools to include pesticide use reduction in their materials in addition to energy efficiency and recycling.

While many IPM policies allow chemicals as a last resort or in an emergency. Aimee tells schools “I’m going to work with you so we never get to that last resort.”  Then the yellow jackets that might have been considered an emergency are no longer an emergency.

Aimee Code is the Pesticide Program Coordinator at The Xerces Society for Invertebrate Conservation.  Previously employed with the Northwest Center for Alternatives to Pesticides she has more than fifteen years of experience working to protect people and the environment from pesticides. During her career her efforts have protected low-income families from exposure to pesticides through her promotion of integrated pest management. She was also an integral part of securing federal protections to reduce pesticide contamination in salmon-supporting waters from Southern California to Northern Washington. Most recently, she was part of the coalition that passed legislation in Oregon that guarantees pollinator protection training for pesticide applicators, and established a task force to examine issues relevant to pollinator health.  Aimee received her Masters of Science in Environmental Health with a minor in Toxicology from Oregon State University.

Aimee was a speaker at the The Beyond Pesticides 32nd National Pesticide Forum, Advancing Sustainable Communities: People, pollinators and practices, Portland, Oregon, April 11-12, 2014